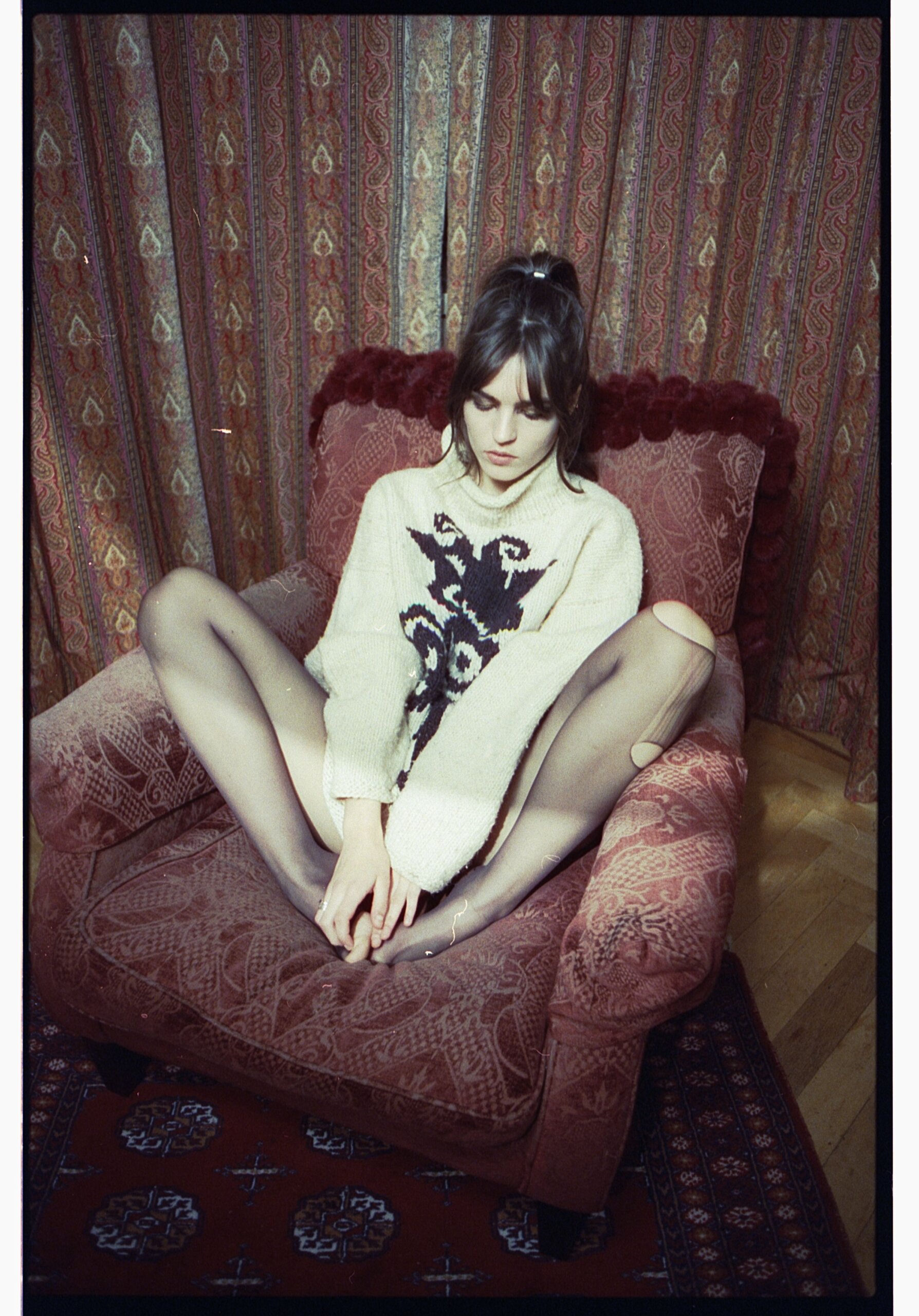 Gretel Hänlyn’s voice isn’t one you’ll forget. Powerful and commanding, her rich, husky vocals dominate whatever soundscape they unfurl across, whether it’s the lo-fi electronics of Mura Masa‘s recent single ‘2gether’ where she takes the lead, or the gnarly alt-rock of her recent solo release, ‘Motorbike’. Her’s is a voice that the 19-year-old artist, real name Maddy Haenlein, is proud of. “No one’s ever said to change it,” she tells NME over Zoom from her parents’ house in Acton, west London: “If they did, I’d tell them to fuck off.”

“My vocals are the thing that if people like my music, it’s usually what draws them to it.” On each of the three tracks Haenlein has released under the Gretel Hänlyn moniker thus far, it’s her ethereal vocals – pitched somewhere between London Grammar’s Hannah Reid and Florence Welch – that’ll stop listeners in their tracks.

Yet it’s not something that’s always been there. “The voice that I sing with now, I don’t know that it’s necessarily the voice that I would have been born with,” she says. Born and raised in Acton, Haenlein’s first love of music came through boy bands like Take That and One Direction. From there, she started to pinch her dad’s records, drawn to the music of Nick Drake, The Killers and Pink Floyd, and took guitar lessons, but never vocal ones. “I kind of just found my own way there,” she says of developing her singing voice.

In her teens, Haenlein was admitted to hospital with an illness that saw her lose muscle mass, particularly around her diaphragm, which prevented her from singing. “When I regained the muscle and the control I was singing so hoarsely and so differently, and I never actually learned how to sing properly again,” she says.

It was in recovery that she started to write her own songs. “It was the only thing that could console me, you know, and that didn’t feel empty, was when I was trying to sing. It sounded really bad for a long time because I couldn’t sing – but then I got it back.” Singing over a “frog in my throat” and “almost through my jaw,” she relearned the skill and adjusted her style, never feeling the need to correct her tone to a more ‘proper’ sound, drawn instead to the unconventional but appealing new one.

When Haenlein turned 16, she started to gig at places like The Basement Door in Richmond under the name “Maddy Bean”, a pseudonym inspired by Kurt Cobain’s daughter, Francis Bean Cobain. “I very quickly realised that I’ve made a terrible mistake, and literally anything was better than Bean”, she laughs.

The moniker Gretel Hänlyn came later. Set to study physics and philosophy at university, it was her mum who convinced her to sack off the degree and pursue music. “She just said: ‘Quit the day job. Don’t go to school. Just do music, because this is what you’re meant to do’”. Haenlein selected the name Gretel Hänlyn, after her great aunt. The OG Gretel Hänlyn grew up in Germany on a vineyard and bears an uncanny physical resemblance to Haenlein. “She had a really interesting history herself with mental health issues and deranged family members,” she says of her doppelgänger. “I just completely found myself hooked on that name.”

Haenlein is now gearing up to release her debut EP in later this year, a splendid thing that hops from euphoric indie-rock (‘Motorbike’) to Britpop-inspired belters (‘It’s The Future Baby’) and maximalist-psychedelia (‘Generation Game’). On the project, she worked closely with dance don Mura Masa, who co-wrote and co-produced debut single ‘Slugeye’, and returned the favour by lending her vocals to Mura Masa’s wobbly 2021 single ‘2gether’.

“We were done in 20 minutes. It was so quick… and then we just went and got a beer,” Haenlein says of their recording process. Now close collaborators, Mura Masa has also taken Haenlein under his wing, introducing her to other artists at parties and festivals and offering guidance: “He never fails to create good music,” she says. “And I think people know that; both musos see that, and just the normal average listener sees that from him as well.”

On her EP, she wants to welcome listeners to the sonic landscape she’s created. “Your voice is an instrument…for the integrity of keeping your sound you don’t have to stick to one voice every single song”, she says. You can hear this recognition in real time on ‘Motorbike’, where Haenlein’s distinctive singing voice is layered with her screaming, hyperventilating and moaning – fully depicting a chaotic, drunken night out.

Haenlein’s other aim with her music is more ambitious: to bring back the melodic guitar music of the ‘90s. “I think guitar music has really stagnated and there doesn’t feel like there’s melody to it these days,” she says. “There’s a reason that on a drunken night out everyone is singing the ‘90s indie tracks, and nothing from the 2000s or recent, and it’s because there isn’t anything right now. And I think I’m going to be the one to try and bring that back.”